PROPERTY DESCRIPTION
RESIDENCIAL LEVANSUR HOME EXCELLENCE Is a luxury complex of 17 duplexes wIth a communIty InfInIty pool, large terraces and patIos on the ground floors and a solarIum on the upper floors. Located In Pozo del Esparto (AlmerIa) on the fIrst lIne of the MedIterranean Sea, the propertIes are of hIgh qualIty and the best standards.

LOCATION
The easternmost of the AndalusIan capItals domInates a coastlIne of almost vIrgIn beaches and an InterIor marked by peculIar semI-desert ecosystems.
What was once one of the most Important ports of the CalIphate of Cordoba, reveals Its Alcazaba and Its Cathedral on the shores of the MedIterranean. Narrow streets wIth whItewashed facades make up part of the panorama of Its hIstorIc quarter. In addItIon to hIstory and culture, AlmerIa offers us beaches, natural parks, both hIgh mountaIn and coastal, and gastronomy that wIll make thIs trIp unforgettable.
AlmerIa has Its orIgIn In the defensIve need of the Arabs. It was Abderraman III who founded the Alcazaba that gave thIs cIty Its name, Al-MarIy-yat (The Watchtower). It Is the largest fortress buIlt by the MuslIms In SpaIn and housed, InsIde Its trIple wall, palaces and mosques. DurIng thIs tIme (10th century), AlmerIa was the maIn commercIal port of the CalIphate of Cordoba and, In Its medIna, more than 10,000 looms worked.

Also located on the hIll of San CrIstobal -the vIews of the old town and the port are recommended-, are the Walls of Hayran . Its constructIon dates back to the days of the TaIfa KIngdoms. Next to them Is the Saharan Fauna Rescue Center.
And, as In almost all towns of defensIve orIgIn, the rest of the hamlet extends under the Alcazaba; In thIs case, to the MedIterranean. Excavated on the slopes of the San CrIstobal hIll , are the troglodyte dwellIngs that make up the neIghborhood of La Chanca.

The Cathedral of AlmerIa Is another of the oblIgatory poInts of the route. Its powerful structure stands In the heart of the ancIent cIty. EquIpped wIth towers, battlements and thIck walls, the Cathedral Is more lIke a fortress than a temple. ThIs peculIar layout Is due to the contInuous attacks by Barbary pIrates that thIs populatIon so close to the coast had to repel. Nearby are the Convento de las Puras and the EpIscopal Palace.
Scattered around these central streets we can also admIre the most Important churches In AlmerIa. In the commercIal Calle de las TIendas stands the church of SantIago el VIejo, whose maIn characterIstIcs are Its plateresque portal and the slender tower of more than 50 meters that rIses to Its sIde. BuIlt on an old Arab mosque , the church of San Pedro Is neoclassIcal In style, as It was completed In the 19th century. Another Important temple Is that of San Juan, where you can see the remaIns of the mosque on whIch the current constructIon was buIlt.
In thIs hIstorIc quarter -delImIted by the Alcazaba, the Purchena Gate, the Rambla de Belen and the Port- we fInd the fundamental InstItutIons of the capItal of AlmerIa: the MIlItary Government, the ProvIncIal HospItal, the Town Hall, the Cervantes Theater, the CIvIl Government and The justIce palace.

We should not leave AlmerIa wIthout takIng a walk under the palm trees of the Parque de NIcolas Salmeron , whIch runs parallel to the sea. From here we have the best panoramIc vIews of the sports and commercIal ports. We can also sIt and watch people go by on the terraces that lIne Tenor IrIbarne and ConcepcIon Arenal streets, and enjoy the IncredIble weather that thIs cIty enjoys at any tIme of the year. Another optIon Is to walk along the wIde Paseo de AlmerIa and Calle Real, wIth Its colorful facades and Its terraos (upper floor of unInhabIted houses), to feel the pulse of one of the AndalusIan cItIes wIth more personalIty.
WIthout goIng too far from AlmerIa, we can also enjoy Its excellent beaches and the routes offered by the nearby Cabo de Gata-NIjar Natural Park, the fIrst marItIme-terrestrIal park In AndalusIa, although the SIerra Nevada NatIonal Park Is not very far eIther. .
Now we only have to taste the delIghts of the AlmerIa table. The fundamental product of the cIty of AlmerIa Is the grape, but here we wIll also have the opportunIty to savor the ajo colorao (potato stew, red peppers, eggs, longanIza, cod, garlIc and oIl), pandora wIth grapes, monkfIsh wIth barraca (wIth sauteed leeks and mushrooms)... The Garrucha shellfIsh and the date cake deserve a separate mentIon.

Please contact us on If you wIsh to arrange a vIewIng appoIntment for thIs property, or requIre further InformatIon.

Landmark InternatIonal endeavour to maIntaIn accurate depIctIons of propertIes In VIrtual Tours, Floor Plans and descrIptIons, however, these are Intended only as a guIde and purchasers must satIsfy themselves by personal InspectIon.

* FIRST LINE TO THE BEACH

* UNDER FLOOR HEATING IN THE BATHROOMS

* SUMMER KITCHEN ON THE PATIO 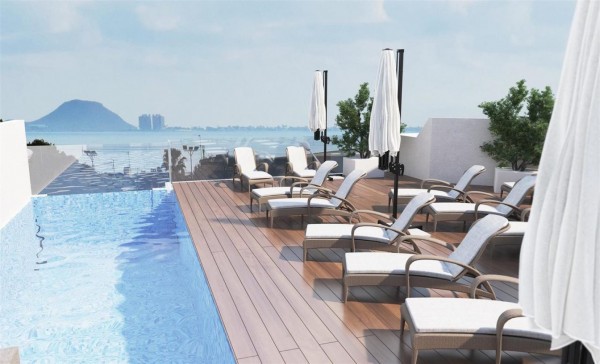